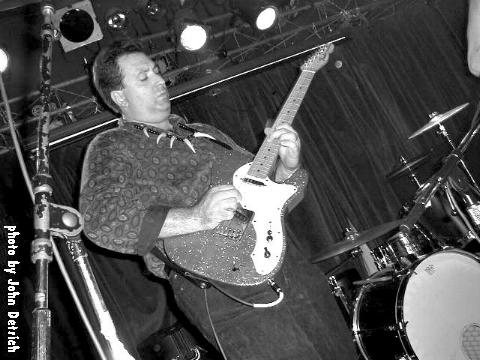 I was born behind a dumpster in an alley in Georgetown. As fortune would have it, I would be found and adopted by Bubbles Backdoor and Tawny Tickles, two strippers from a joint on the avenue. Being raised in clubs, I found that the stage and the Biz came natural to me. Yet I also realized that I could not follow in my two mommies' spiked heels. So, I turned to Rock & Roll and the electric guitar to express my torrid existence. After saving every dollar bill I found on the club floor which slipped out of the girls' garters, I bought my first electric guitar at the age of 13. Seeing that guitar shaped like a beautiful woman, I couldn't wait to get my hands around it and play. I plugged that thing in, cranked up the reverb, maxed out the volume and have been making those rock-n-roll sounds ever since. My first band Dumpster Baby failed miserably. The guys in the band couldn't relate. Then, it happened, the one thing that would change the face of Rock & Roll and my life forever: I met Brian Horrorwitz. He asked me to join The Ubangis, and for years we have been pounding out the only real form of primitive sex-laden jungle music, known to the world as the Ubangi Beat.