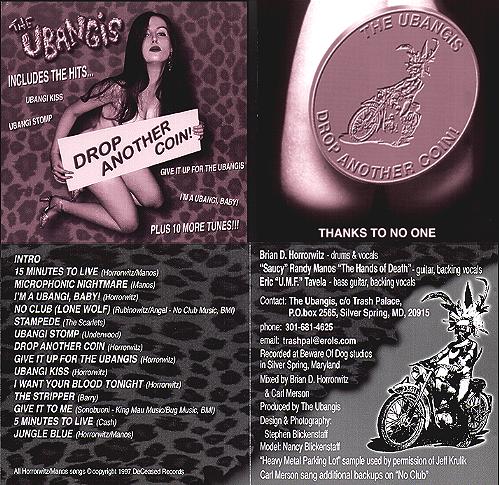 THE UBANGIS
"DROP ANOTHER COIN" CD

"THE UBANGIS UNCOVERED" - A MESSAGE FROM THE BAND: 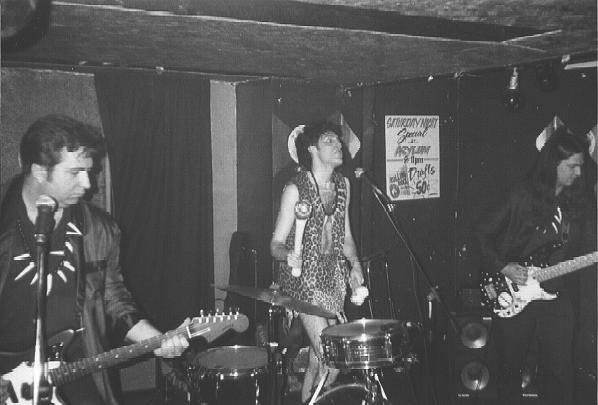 'Just a few short months ago we were just another unknown group of 3 singer musicians working in small clubs...and at small wages too!! Then our manager discovered us and put months of hard work into teaching us the art of recording (and believe us...it is an art). At least 10 hours of work was put into each tune on this cd. A dozen other tunes were started and junked!! Our manager is perfection and installed in us the confidence we needed to become a top group. As for our nicknames and costume bones & loincloths...well we decided that we wanted to be different and this was a good way of doing it!! Also each of us were employed at jobs and we were all afraid that our bosses wouldn't like the idea of employing rock and roll singers as... 1. A credit manager 2. Commodity buyer 3. Engineer. So the names & costumes were not to hide us from the public... but our guvernors (sic). When we were ready to "uncover", the agents, bookers, record company and other sundry employers screamed no!!! We would really love to be "uncovered". Can you please help us?'
---Saucy, Brian & U.M.F., THE UBANGIS

DeCeased RECORDS PAGE
(THE PLACE TO BUY "DROP ANOTHER COIN" AND OTHER UBANGIS' STUFF!)